The Lover’s Dictionary by David Levithan 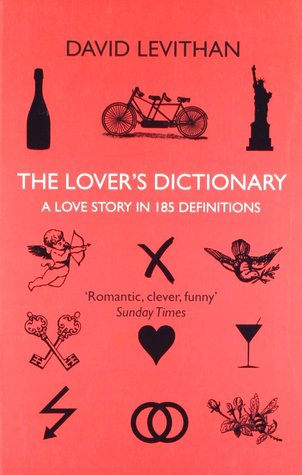 I read The Lover’s Dictionary a few weeks ago because I found the concept of the book interesting. Even more so than the story, which is just an ordinary love story. Where a man and a woman fall in love and then break up.

“It was a mistake,” you said. But the cruel thing was, it felt like the mistake was mine, for trusting you.

We are all beginners when it comes to love. From those tentative first dates to learning how to live with, or without, someone. But how does one describe love? David Levithan’s ‘The Lover’s Dictionary’ starts where we all once started – with the alphabet.

First of all, as I said a few lines up, I didn’t read the book because of the story. It’s a story you can find in a hundred thousands book. It was the way it was written that interested me more than anything. I found the concept of writing a book in the form of a dictionary intriguing and wanted to know how such a thing could be done.

Writing a story in the form of a dictionary is an innovative concept. But alas, that’s kind of the only good thing I can say about the book.

Frankly, I wouldn’t say I liked The Lover’s Dictionary much. Sure it was entertaining, but it wasn’t my cup of tea, I read it as fast as I could to get it over with. (I have a problem stopping books in the middle, even when I don’t like them). The love story between the protagonist was cliché. So much so that I don’t have anything to say about the book in general.

So, in conclusion, I wouldn’t recommend the book even though the concept of it is fascinating. But the story within is just something that became cliché over the years…

Like Loading...
Classics, Fantasy, Review, Science Fiction
-
2 Comments
Paper Towns by John Green
My year in books according to Goodreads (2016)