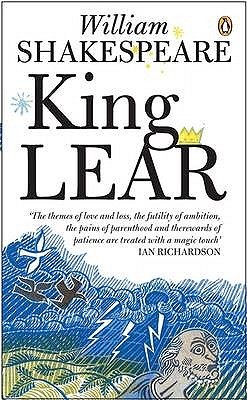 I read King Lear for my British literature class this semester. And tomorrow I’ll have my final on it. It was the first Shakespeare that I read in English. It was way harder than when I read it in French because, in French, they tried to translate it so anyone could understand it.

When we are born, we cry that we are come to this great stage of fools.

This play is about King Lear, who decides to divide his kingdom among his three daughters using a competition in which they should tell him how much they love him. The one that loves him the most is the one that will get more land. Goneril and Regan, his two eldest daughters, lie and tell him what he wants to hear. And they each get a big part of his kingdom. Cordelia, the youngest one, refuses to proclaim her love for her father. Saying that the love she bears him cannot be told, she is then disinherited by her father. And Lear divides the kingdom between his two eldest daughters.

After a while, Lear asks Goneril and Regan to shelter him, but they refuse, making a fool of him. He then proceeds to curse them and rejects them as his daughters.

At the same time, a nobleman, Gloucester, experiences a similar problem with his two sons. His illegitimate one, Edmund, makes him believe that his legitimate son, Edgar, is plotting to kill him. When he learns of it, Edgar flees his father’s wrath, disguising himself like a madman.

I liked that it was the first play that I read of Shakespeare in English because it is not the most complicated one. Yet there are some themes or references that we might not get at first glance. I was also happy to study this play in class because that allowed me to have a better understanding of the play than if I read it alone.